The Book of Changes

The I Ching is structured around two tri-grams; two units that are each made of three (tri) horizontal lines (grams). The first one is three solid lines and the second one is three broken lines. 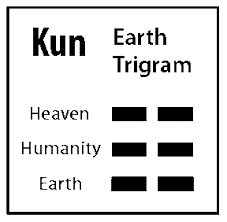 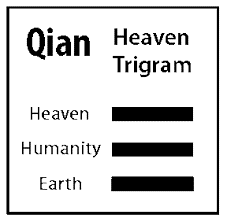 These two foundation trigrams represent the yin and the yang: the positive and negative, the dark and light, the above and below, the male and female polarities of nature.

There are eight ways to combine them:

When we combine all the possible combinations of the trigrams together, we get sixty-four hexagrams (six lined figures):

This is a perfect number as it equals ten (64: 6+4=10). We’ve now exhausted all possible combinations of this simple equation.

All of creation is manifests from two basic polarities: dark/light, positive/negative, male/female. hence the mystical axiom, as above, so below. All other forms of divination and mysticism simplify existence and the Human Condition to two fundamentals. We see the same in physics with the positive and negative charges within the atom.

Everything you experience is an octave of these nine conditions.

This is consistent with every other form of divination and mysticism, from the seventy eight cards within the tarot, 12 zodiacal signs in astrology and the ten sephiroth in Kabala. Each and every form of mysticism has this not only in common but is merely a varying cultural expression of the exact same formulae! Kinda like in the US and the EU we eat sandwiches but in Latin countries we eat tacos! Same principle: protein contained within starch envelopes, but merely different expression of the same. And on and on: falafel and pita, roujiamo in China and veggies on roti in India!

The I Ching is the Chinese expression of the human condition the same as Kabala and tarot are the western ones. Each and every religion and culture has one and they are totally interchangeable!

Basically, the I Ching is saying that the entire human experience can be boiled down to just eight expressions of it and that all the rest are higher and lower octaves of these.

The sixty-four hexagrams accurately represent the entire variables of the human experience. Last explanation of this! Ready? Seven notes on the musical scale create a seemingly infinite number of frequencies when the base seven are played at different octaves and chord combinations. Seven colors in the color spectrum make the kaleidoscope of all the hues and shades in our big box of 64 Crayolas (uh-oh! There’s that number again: sixty four!).

The way these 64 hexagrams were defined and described is mystical itself. There is no author of the I Ching. It is timeless and archetypal—possibly a part of the fabric of reality recorded within the Akashic records[1]. Absolute and archetypal knowledge is channeled by sages and saints with enlightened minds who produce them here on the material plane in various forms, from books to symbols or just by word of mouth.

The interpretations of the hexagrams are not arbitrary. They are archetypal and cosmic concepts distilled into language for human consumption! This means that the meanings of hexagrams are intrinsic; it is natural and is not based on anything. They are the symbols of qualities, like a waterfall is a waterfall and the word waterfall is just the label we assign to it. The trigram chien is three, unbroken, horizontal lines—an expression of primal and raw masculine nature, and the trigram Kun is three broken lines—an expression of refined, feminine nature. The trigram of two solid lines beneath a single broken line is Dul, lake. This ia a combination of feminine nature (earth) and masculine (heaven). In this new and improved trigram, we have both feminine and masculine qualities: the masculine is dominant in the sense it is more (two solid lines to one broken ), but the broken, feminine line is dominant in the sense it is on top.

To go into further octaves of reality, we can combine tow trigrams together for a single hexagram. Let’s start with the core sources: Chien, the master masculine trigram of three solid lines combined with Kun the master feminine trigram. But which one goes top and which one goes bottom if we merge them? Both! One hexagram is with the feminine kun above and the other is with the masculine chien above! Like this:

Well, these ancient mystics would say the same thing to Einstein if they time travelled to CERN, the quantum physics Mecca of science, and were told that the entire material phenomena was made up entirely of a few tiny subatomic particles called strings and quarks by mish-mashing together for the whole of creation!

The only seemingly craziness about using this (and other mystical formula) to predict the future or explain events is the seemingly random way we select a hexagram and assign it to our particular question or situation.

It ain’t so random!

There’s a science here too! The I Ching reader is transmitting frequencies through thought. Thought is an energy and does indeed have a frequency that can be measured and has influence. Just ask anyone who is sitting next to me when I’m in a good/bad mood! It rubs off! I piss people off just by being pissed off with my mouth shut! And some people cheer me up just by being nearby and cheerful!

When I concentrate on a question or situation with strong thought and emit a radiance of emotion about it, it influences my actions and movements! It influences the environment like cheerful or mad does and this transmission of thought and emotion causes a wave in the environment which has an effect on the trigrams and hexagrams that are drawn on while consulting the I Ching!

The Tree of Life